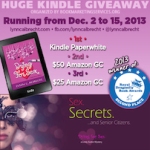 Today’s guest blog post, on the topic of social networking, is brought to you by Lynn C Albrecht, courtesy of Book Marketing Services. See below for giveaway opportunity.

Write what you know about. That’s what writers are supposed to do. Well, not today my friends. Today I’m wading into the world of social media, and trust me, I’m no expert.  I once told my daughter quite proudly that I’d just “twittered.” That’s how little I know.

So why talk about it? I was fifty-four when I started to write Dying For Sex and like many older people, I hadn’t even given a tentative nod to social media, yet alone embraced it. I had no idea that once my book was finished I would need to become intimate friends with Twitter, Facebook and blogs. If I had known, I might have started flirting with them a little earlier.

But I naively thought that Dying for Sex would be snatched up by a mainstream publishing giant and its huge publicity team would spread the word about my funny mystery far and wide. The mucky marketing stuff would be dealt with by “my people”; I would stick with what I do best, writing books. Yes, I’d be blithely working away on my next book while sales went through the stratosphere and my bank account burgeoned.

As you’ve no doubt already figured out, I was living in my own little fantasy world fueled by a whole lot of ignorance and maybe a glass or two of Pinot Grigio.  Dying For Sex was not published by a mega-media conglomerate, but rather a small independent publisher with nary a well-oiled publicity machine in sight. Suddenly, it was two in the morning and my, didn’t those social media studs over yonder look mighty fine! So I took them all home with me.

When our relationship was still new, it was little hesitant at times. Twitter kept sending me come-hither looks, and Facebook urged me to like and be liked.  I did try to understand them, I really did. But sometimes I felt like they just didn’t get me either.  Then I realized it was my problem.  I was a little shy about talking about myself and was afraid of saying the wrong thing in such a public forum.

Writing and having a book published is hard work but so satisfying, the urge to keep doing it becomes entrenched in your soul. But like many writers, I find marketing my work is the most difficult part of the process. I admire the authors who wield the social media tools so proficiently. And it’s difficult in the face of their casual confidence to admit that I’m a novice at social media and at times, feel like a total idiot. But at my age and after raising teenagers, you get used to the feeling and just soldier on knowing that with time, it will pass.

However, I wish I had known much earlier in the process how important a good marketing strategy is and what a massive role social media plays.  I now know that I have to use the same care and diligence I put into creating a story, into creating the marketing plan that will sell the story.

So go ahead, make lists of who you want to review or write about your book. I’m talking everything from local and national papers and magazines to small town newsletters and community television.  Call or email libraries, bookstores, book clubs and any other organization or person you think will help your cause. Enter awards.  If your book is of a certain genre, join organizations related to it. I belong to the Crime Writers of Canada and as a result have had the opportunity to speak with and learn from other authors. As well, it has afforded me the opportunity to get into Word on the Street as part of CWC and be part of the Ontario Librarian’s Super Conference this coming January.

All of these things are important, but I can’t emphasize enough that if you didn’t grow up with computers and the Cloud, start dabbling in social media sooner rather than later. The more comfortable and confident you feel tweeting and posting comments on Facebook, the faster your book will get off the ground and into the hands of readers. It’s an essential part of any good marketing strategy so don’t play coy, go for it.

Thank you, Lynn. I don’t really do enough (other than promoting this blog) on social networking. It’s time, I think, for most of us, but we should try harder. It’s also a great way of meeting other authors / potential readers. Out of the 800+ authors I’ve interviewed, only two (from memory) have said they don’t do their own marketing (that their publisher, agent etc. does it) and yet they’re still on Facebook / Twitter.

Lynn C. Albrecht started her career in broadcasting. Quickly realizing she was not going to be the next Lisa Laflamme, she entered the world of corporate communications. After years of writing videos, speeches, advertising, and dressing in power suits with shoulders pads that made her look like Hunter Hearst Helmsley, she had a great epiphany. She ditched the shoulder pads and returned to school. Five years later, she was released into the unsuspecting healthcare system as a social worker. She works at St. Mary’s General Hospital in Kitchener, Ontario.

Lynn lives in Baden, Ontario with her infinitely patient husband, John Belton.  Dying For Sex is her first book. She is currently hard at work on the second Lindy Sutton mystery. You can find out more via http://lynncalbrecht.com and https://www.facebook.com/lynncalbrecht.

About Dying for Sex:

Lindy Sutton has her hands full. In between having her clown act clobbered by pint-sized critics, keeping a group of sex-crazed octogenarians from starting brawls in the raciest bar in town, and trying to keep her crazy Aunt Pip from being tossed out of Laughing Pines retirement home, she still has to contend with her son’s garish band bus parked in her driveway. Could things get any worse? Yup! Margaret Quaid, the social worker at Laughing Pines is found dead of an apparent overdose and the drop dead handsome detective on the case, thinks she stole the drugs from the retirement home and was pretty active in the world of wife swapping to boot. Lindy’s temper soars, along with her long dormant hormones, as she sets out to clear Margaret’s name, find the murderer and make the sexy detective eat crow. Aided and abetted by the aging but flamboyant Chappy Lowton, her eccentric and sarcastic sister, her best friend Patty, and that hoard of sex-crazed geriatrics, Lindy wades into the world of swingers only to find that there are plenty of people with a motive to kill the social worker.

You can find out more from http://lynncalbrecht.com.

** NEW!! You can now subscribe to this blog on your Kindle / Kindle app via Amazon.co.uk or Amazon.com **

I welcome items for critique directly (see Editing & Critique) or for posting on the online writing groups listed below:

We look forward to reading your comments.