Welcome to Flash Fiction Friday and the one hundred and thirty-eighth piece in this series. This week’s is a 783- worder by yours truly, Morgen Bailey. This story will be podcasted in episode 42 (with two other stories and some 6-worders) on Sunday 27th July. 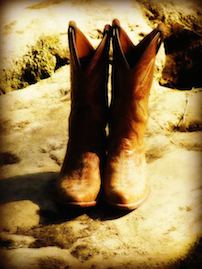 Neville wasn’t used to this. No one usually took any notice. He was the grey man who blended into any scene. Here, everyone looked at him, at his face. His face was, Neville corrected, the last but one thing they looked at after they’d stared at his feet, working their way up his too-skinny body. A quick glance at his beaver-felt hat with its simple black banding, and they’d be back at his boots, before looking away or talking to their neighbour who’d repeat the process.

The expressions on the faces of the men and women – children didn’t seem to understand the significance – had been hard to read until Neville saw enough of them to work out why they were paying him, or rather the boots – the dead man’s boots – so much attention.

All he had to do, Neville decided, was to act brave and he’d be brave. Be the new boots’ owner and live up to their reputation. So he’d held his head a few inches higher, his shoulders squarer to their frame, his scrawny chest puffed out as far as it would go and still allow him to breathe.

The first challenge, he knew, was to dismount the grey mare with the confidence of a seasoned rider, not of a man who’d screamed when he’d come across the half-dozen bodies, sending all but two of their horses fleeing. He’d then grabbed on to the reins of the grey and the chestnut, and gone where they led. The chestnut reminded him too much of his uncle’s horse, so Neville hadn’t wanted to try to get on that one. The grey seemed calmer so, after three failed attempts and a mouthful of dirt, Neville had shuffled his almost non-existent backside into the saddle and gently nudged the grey into action, with the chestnut’s reins secured so it had no choice but to follow.

As it turned out, when Neville reached the town’s only hotel, he needn’t have worried about dismounting, as a tubby little man rushed towards him. Normally Neville would have flinched, but he watched the man grab the two sets of reins and secure them to the long wooden rail that stretched the width of the hotel’s saloon bar.

The man shuffled a few feet and picked up what looked to Neville like a plain box but as the man brought it nearer, Neville could see it was a large step. The man put it down between the horses, looked at Neville’s boots and laughed nervously. He then held out his hand. Neville nodded, dismounted with ease, and gave the man one of two silver coins – the only money Neville possessed.

The man grinned, nodded repeatedly as he backed away, then watched, head bowed, as Neville entered the saloon.

Neville’s new boots were three sizes too big, so he dug his toes down on to the leather lining so that his feet didn’t move around too much, and took slow, deliberate strides into the bar.

He knew everyone was looking at him, even those who couldn’t see his boots. The pianist stopped playing, card games paused, and the few women in the room broke into hushed conversation while the men watched Neville, their eyes narrowing.

Neville wanted to smile, to lap up the attention but he knew hard men didn’t smile – his uncle had never smiled – so he gritted his teeth, straightened his shoulders until his back ached, and made it to the counter.

Most of the customers waere seated, leaving just three people at the bar: the tall dark-haired barman, a shorter white-haired man with most of his teeth missing, and a woman in a very fetching russet ruffled dress who had been fawning over the man despite him being old enough to be her grandfather. “Probably is,” Neville thought.

The old man shooed the woman away as Neville took off his hat, pushed back a stray auburn hair that had been tickling his nose for the entire ride along the dirt-track that was the main road into town, despite him puffing air at it until he’d spotted people staring at him.

Neville placed the hat on the bar – not his hat, another dead man’s hat – and turned it round so it faced front. Neville liked things to be neat, just like his mother had. He couldn’t help but make the sign of the cross on his torso whenever he thought of her. The barman put down a glass he’d been cleaning, replicated Neville’s gesture, pausing his index finger on his right shoulder blade before lowering his hand and picking up another glass.

The barman and customer exchanged glances.

Neville coughed then growled, “Get me a beer.”

This was homework for last night’s Northampton Writers Group. We had to write a western and this is only the second I’ve ever written in that genre… maybe it shows. 🙂

Based in Northamptonshire, England, Morgen Bailey (“Morgen with an E”) is a prolific blogger, podcaster, editor / critiquer, Chair of NWG (which runs the annual H.E. Bates Short Story Competition), Head Judge for the NLG Flash Fiction Competition. She is also a freelance author of numerous ‘dark and light’ short stories, novels, articles, and very occasional dabbler of poetry. Like her, her blog, https://morgenbailey.wordpress.com, is consumed by all things literary. She also recently created five online writing groups and an interview-only blog. Her debut novel is the chick lit eBook The Serial Dater’s Shopping List.

If you’d like to submit your 6-word or 500-word max. stories for consideration for Flash Fiction Friday take a look here, or up to 1,000 words for critique on my Online Short Story Writing Group (links below).

** You can now subscribe to this blog on your Kindle / Kindle app via Amazon.co.uk or Amazon.com **

I welcome items for critique directly (see Editing & Critique) or for posting on the online writing groups.

an unusual healingJuly 31, 2021
July's competition is now closed. The theme for August is 'an odd pairing'... however it strikes you.