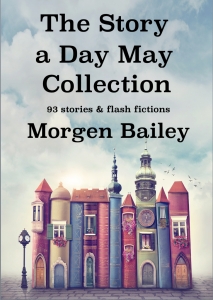 The following piece of flash fiction is from Morgen’s smaller short story collection (just 93 stories instead of 250!), The Story A Day May Collection, available in eBook and paperback from Amazon  and Morgen’s online store where you can not only instantly download the collection but also purchase the paperback dedicated to you or as a present! We hope you enjoy this story…

“Remember when this was fields?”

“Ten years, just over. A month or two after Sally and Ben got engaged. They were one of the first to buy here.”

“A small fortune, yes, but they wanted eco-friendly and the King was pushing for that so of course everything cost more.”

“King Charles? Was he on the throne already by then?”

“Not long before. 12th June 2014. Ben’s thirtieth birthday. The Queen abdicated on Sally’s; 15th May. Guess it came as a bit of a shock so it took them a while to sort out the paperwork.”

“No. The coronation. The government.”

“Oh, yes. Nice party. This drinks party, I mean, not the government…”

“Isn’t it? Not many faces I recognise though.”

“Have they? For houses?”

“Yeah. Can you imagine?”

“Not really. A thousand on the bit of land behind the farm?”

“What? What’s going to happen to the house?”

“When he got the letter offering seventy million.”

“Seventy million? What happened to that?”

“Lives in the States. Married a girl over there and stayed. Didn’t want the farm, of course.”

“Who would when offered that much?”

“Think they fell out.”

“Reconciled after this death, though, didn’t they? A thousand homes. Wow. The council will grant anything these days.”

“It’s the government push… since the shuttles started bringing the… you know, the legal aliens.”

“Of course, but people are leaving too, though, aren’t they?”

“Not as many. We have more resources here.”

“True, but Mars is young and you’d think exciting.”

“Fine for single people, but most have families these days, especially given the couple’s bonuses shooting up since the housing crisis came to the fore, and most wives would be more traditional, you know, happier to stay put. They’ll wait for Mars to be established then they’ll go. If they go. Most can’t afford it.”

“Can if they have farms to sell.”