Hello everyone and welcome to the fiftieth month of this competition. There were 35 entries from 19 authors for the theme of ‘praise’. NB You can all send in three stories for a better chance of being picked.

One author sadly had all three stories disqualified for being under the 100-word requirement. Another entrant had one of their three stories disqualified for being 99 words. There was a word that should have been hyphenated but it still only counts as one word. Another of the same entrant’s story was 103 words for no apparent reason other than having too many words, which was a shame. Even more so that the remaining story was only 97 words so also disqualified.

Another ended up being 99 words because a time period hadn’t been hyphenated (two week break instead of two-week break). Fortunately the author had sent in two other stories, one of which I preferred anyway so that went through to the final judging.

The winning stories are ones that I reacted most favourably to. They were clever, surprising, eek-making (in a good way),or gave me a warm fuzzy feeling (without being sickly). Sometimes a story beats another because it has a strong link to the theme – and this is very much the case this month – so it’s often worth writing a story to the theme rather than tweaking a story you already have to loosely fit it.

*The theme for November is ‘not his / her fault’ and you can submit your entries (and do send three) at any time up to midnight (UK time) on Saturday 30th November. Details and entry forms on https://morgenbailey.wordpress.com/100-word-free-monthly-competition. So without further ado, below are the successful entries this month.

Jane Brown with ‘The Faulty Bot’ 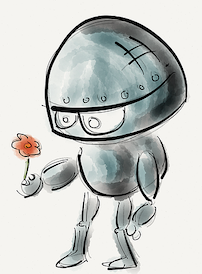 The first praise-bot rolls past. “You’re fantastic!” it says.
“Pass,” records Gavin, sighing. Quality control testing is just so boring.
More praise-bots roll by, one by one. Each spouting admiration.
“You are very intelligent.”
“Nice hair.”
“You smell lovely.”
“Great outfit.”
“You have a huge arse.”
“Stop test!” yells Gavin. “Fail.” he says, picking up the faulty bot.
Suddenly, Ted from Testing Room 2 runs in.
“Code red! We have a situation – a truth-bot is missing! Ah, there it is.” He grabs it carefully from Gavin’s hands and leaves.
Gavin trundles over to the mirror, examines his arse and sighs.

We talked to all the plants in a cursory way, chatting as we tended them, but we’d agreed to experiment by lavishing one with constant and continual praise.
We told it how beautiful, how clever, how strong it was and it responded.
It flourished.
Its stem thickened and its leaves became bushy. It was by far the tallest specimen and it even seemed to twist slightly towards the sound of our footsteps each morning.
That final day the first indication we had were the sharp blades of shattered glass outside the greenhouse.
We didn’t realise our mistake until too late.

Astra Lowelle with ‘Hearing and Listening’

Willow had been playing violin for years. She knew she was a first-rate player, even if no one ever told her.
She knew because her music teacher nearly had a tantrum when she had called in sick a day before the recital. She knew because her mother had refused her a normal childhood ever since she had begun to take lessons. It was always one concert after the next.
But she wished someone would say she was good.
Even once.
But she realized they wouldn’t, so she’d learnt to really listen, and her violin told her each time she played.

I could see she was his.
They had the same eyes, same shaped face and the nose: straight, with a slight kink on the bridge.
I held her hand and led her to her chair at the front of my classroom.
She’d been crying; first day nerves getting the better of her.
She would be with me now for a whole year, a long time to be reminded of your husband’s infidelity.
I was a professional, these things happen.
She drew a picture of herself with ‘mummy and daddy.’
It hurt, but I smiled. “Well done, Stacy, that’s really nice.”

If you’ve enjoyed these stories and / or just want to leave a comment, please do so below and / or you can email me at morgen@morgenbailey.com., although I won’t (can’t) discuss forthcoming entries unless it’s a general query.