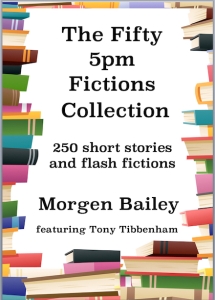 Posted every Sunday, the following piece of flash fiction is from Morgen’s larger short story collection (250 stories), Fifty 5pm Fictions Collection, available in eBook and paperback from Amazon  and Morgen’s online store where you can not only instantly download the collection but also purchase the paperback dedicated to you or as a present! We hope you enjoy this story…

It’s her repetitive moaning I can’t stand so I hum it out with a little tune I know. And it sounds nicer as a whistle… like a bird. That’s what she used to say anyway.

It was her idea to go to France. I don’t even like the French; they’re… well, French. She thinks it’ll be romantic; like our honeymoon… better than our honeymoon, but then you can’t get much worse than Hurricane George on the not-so-tropical island of Mongoose. Mongoon it is of course but it’ll always be Mongoose to me after that; watching those birds from the sanctuary being swept away like that. Holidays weren’t really the same after that. We stayed on dry land. British soil. I’ve always been the traveller but kept my mouth shut for her. Well, I didn’t get a look in, did I?

She was so quiet when we first met; that was… seven years ago now. And this is why we’re here; our fifth anniversary is next week, except she couldn’t get the time off work so we’re just away for the weekend. Out of season of course. I said I wouldn’t have minded waiting; the football season is only on from August to May. A saint she is… of course, but she acts like it’s martyrdom sometimes. But then she likes the sun and June / July is normally pretty nice isn’t it. Yeah, that’s what we thought when we booked it… I got drenched just loading the car. A ‘baby’ she called me… used to call me that in a nice way but then when we were told we couldn’t actually have a real one… you know, a baby baby, she stopped saying it. Topic non-grata or whatever the saying is.

Didn’t help that it was my fault. “It’s no one’s fault,” she’d said but she looked at me funny, and never really looked at me the same way again.

But they got it wrong. Tommy I want to call him, after Tait, one of my heroes, but she was having none of it. Kendal she wants. I ask you. Kendal. She’s always had this thing about the Peak District. I really like Felicity Kendal but I’m not having my child named after a slab of mint cake, but then she just looks at me funny. The wife, not Felicity, unfortunately.

Oh dear, she’s pulling that face – must be wind again.