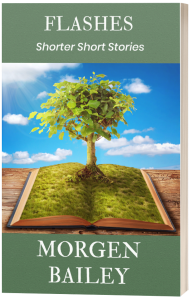 Posted every Sunday, the following piece of flash fiction is from Morgen’s shorter short story collection, FLASHES,  available in e-book from Morgen’s online store where you not only get the best price but can either instantly download the collection or purchase the paperback dedicated to you or as a present! We hope you enjoy this story…

Barry shook the newspaper, folding the right half behind the left. Looking out into the office, he tutted at the almost-empty scene ahead of him. Fair enough. It was lunchtime but he’d expected loyalty – eat a sandwich at their desks and work through.

Some of the red ink from a large advert for half-priced staple guns had bled through on to his blotting-paper desk mat. Pulling at one corner of the sheet, he yanked it out of the black leather, screwed it into a stiff cream ball and launched it at the stainless steel bin, laughing at the metal echo reverberating around his large air-conditioned room.

Swivelling his black leather executive chair towards the window, Barry growled as he watched all the people scurrying through the snow, some he knew, but others meaning even less to him. Outside the building’s main gate he spotted an old-fashioned hot chestnut cart patroned by many of his staff. He wanted to lift up his window, shout at them to get back to work but his office door opening distracted him.

Barry swung round expecting to see Joyce, his secretary, others would knock, but saw another familiar face, carrying a dish of chestnuts. Except it couldn’t have been who he’d thought, as he’d been dead for two centuries.