I went to the above festival recently and made 100+ pages (fortunately only A5) of notes so I thought I’d share them with you. Today is the third instalment and because of the quantity, it’ll be pretty much as I wrote it (not word for word but paraphrasing) so my apologies if it feels fragmented. You can read part 1 here and part 2 here.

After SM introduced the panel, he asked LT about his book and entry to crime-writing and other formats.

SB – reads crime, particularly science-solved crimes. Loves classic horror stories although they can be dissatisfying because the author doesn’t have to explain.

SM – always anted to be a writer?

SB – met a journalist who was going to take a week off work to write a Mills & Boon. She had a student debut so tried to do the same but it didn’t get accepted.

SM – JS so prolific – is it difficult to peg down in theme / setting, are you a magpie?

JS – Yes. Reads everything and sometimes surprises himself. Like SJ, likes writing what he wants to read. Has written two locked-room mysteries.

SM – On page 30 everyone dies, leaving the reader to wonder how he pulls off the rest.

JS – Didn’t want to write a sci-fi novel so had his character who had won a place so was unfamiliar with his surroundings so didn’t need to be specific with the details.

SM to LB – did you have fun with the time-travelling aspect?

SM – Talked about the violence to women in LB’s books.

SB – Many writers have young attractive victims because readers want to read about them.

JS – What if the guy is told by an algorithm that he’s not going to be president? Family tragedy at the beginning but the family issues are the heart and soul.

JS – Identity, fate and teeth crop up in everything he’s written. “Don’t ask about the teeth.”

SM – Referred to JS writing for the Guardian.

JS – If fans of the blog had their way they would have him just do that. He wrote The Machine (sci-fi horror).

SM – Lacey Flint series – so you like writing series?

SB – readers and publishers wanted more of the earlier characters but SB prefers writing about Lacey. There was a woman who was convinced her son was the Yorkshire Ripper and others had done the same (about people they knew). Something like that makes us wonder about those people close to us.

LB – Interested in Detroit. Strange to see ruins of our era (industry etc) but still a live city because people still live there.

SM – Worried about being real / tech?

LB – Loves the internet but feels that intimacy is over. Humiliation (YouTube).

<questions then invited from the audience>

END_OF_DOCUMENT_TOKEN_TO_BE_REPLACED

I went to the above festival recently and made 100+ pages (fortunately only A5) of notes so I thought I’d share them with you. Today is the second instalment and because of the quantity, it’ll be pretty much as I wrote it (not word for word but paraphrasing) so my apologies if it feels fragmented. You can read part 1 here. 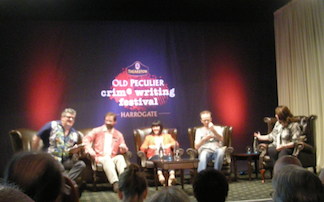 MW: How did you get published?

JO: I self-published, some short stories that had been shortlisted in competitions but not published and sold c.350,000 copies in eight months. I wanted to be ‘properly published’ but kept getting knocked back but then when I did well Penguin approached me.

MS: I was rejected for nine years, including some great personal rejections, so I self-published in December 2011 and it took off. My goal, like JO, was to be traditionally published. My agent took one of my books to the London Book Fair in 2013 and it was picked up (went to auction).

ME: I was on TV in the late 1990s about aspiring writer. I met my collaborator Louise (Voss). It was picked up by the BBC for TV but not published. We put it on Kindle and it got to no.1. It was then picked up by Harper Collins but didn’t get into the shops so we thought that was that so we self-published ‘The Magpies’ which sold around 250,000 copies. I was in debt at the time as I’d given up my day job when taken on by HC but ‘The Magpies’ paid off my debt.

MH: I tried the traditionally published route and came very close to getting an agent and publishing deal. I went with a small press but got the feeling it wasn’t going to plan and was then advised that they couldn’t publish it within the contracted time by which time I’d spent the advance. Every writer needs an agent. Even when I got mine it wasn’t easy as my main character is gay. Her book was published in Germany first and got more polite rejections through her agent.

MW: Was published in 1998 “not that anyone noticed”. How important is it having an editor? 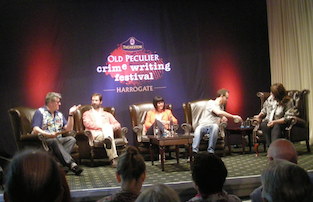 JO: It’s very helpful when readers point out mistakes but it’s not a professional way to get feedback. I’ve been friends with Stuart McBride for a long time and swapped manuscripts.

MS: I was too close to my work and learned by my mistakes. I have six beta readers (my mum’s my biggest critic). I do four drafts before anyone else sees them.

MW: I roll around the floor agonising over my drafts!

ME: There’s a lot of dross out there. When writing with Louise, we edit each other’s writing.

MS: Early copies of one of my books had a prologue but I took it out because I had it pointed out to me that it gave away the plot.

JO: I offered a free second book if anyone spotted any mistakes in the first one.

MH: I also write scripts so I’ve been told my writing is very visual.

MW: The pricing structure is very different with Kindle versus paperbacks and with the former there seems to be a “race to the bottom”.

ME: My eBooks are £3.99 and I’ve begged my publisher to lower the price so I’d sell more and proportionally make more profit.

MW: There’s a war going on between traditional and self-publishing with the latter reducing the former’s profits. What will we do when Amazon kills traditional publishing?

MH: I don’t think they will. There’s too much pleasure from browsing at a bookshop.

JO: I sell twice as many paperbacks than eBooks. I’ve been in publishing for 20 years and it’s always been in crisis.

Questions were then invited from the audience.

END_OF_DOCUMENT_TOKEN_TO_BE_REPLACED

© Morgen Bailey and Bailey's Writing Tips, 2011-2019. Unauthorised use and/or duplication of this material without express and written permission from this blog’s author and/or owner is strictly prohibited. Excerpts and links may be used, provided that full and clear credit is given to Morgen Bailey and/or Bailey's Writing Tips with appropriate and specific direction to the original content. All guest content remains the property of the appropriate author - any reproduction is strictly prohibited without their prior written approval.