Just for a bit of fun, below are some light-reliefs:

Hover your mouse over the white area surrounding the fish (i.e. not within their ‘tank’) and see them move;

Want to know what your writing style is like… or rather, who? Paste a short text into http://iwl.me and they’ll tell you. I tried it twice and apparently I write in the style of Cory Doctorow and Agatha Christie. 🙂

Herewith a list of (some controversial) wonderful phrases that remind us how weird and wonderful the English language is. Thanks to Pat Archer for these (no.19 took me a minute too):

Below is a literary Word Search (which I blogged here on 31st March 2012 to celebrate this site’s first anniversary).

There are 37 children’s authors here: some surname only, some first name, some both (as separate words or together). Some of the authors have also written (and are best known for) adult stories but they have all written children’s. It would be too easy to give you the names to find so I haven’t… have fun. 🙂 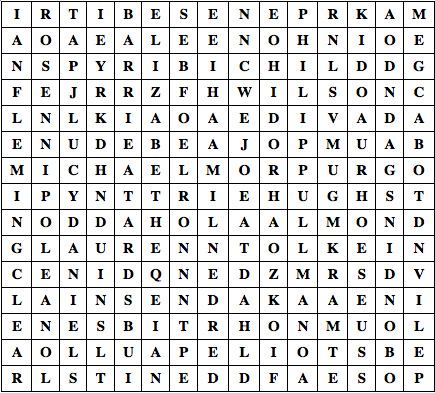 And finally, nothing to do with writing but fun nonetheless, put the fingertips of your predominant hand (right for most of us) on to its nearest shoulder (again, right for most of us). Put a stack of coins (try with one to start with, I don’t think I’ve ever got past a dozen) then thrust your arm out swiftly to see if you can catch the coin(s). It takes some practicing but is fun. 🙂